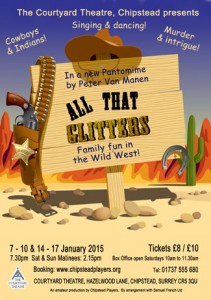 Gold has been discovered in the hills above Tombstone and the town is in a frenzy. Blanche Clanton of the Double Bar Ranch is angry. Geronimo is on the warpath. Happy Holiday, Hortense Forthright and the rest of the folks just don’t know which way to turn. The West is suddenly a wild and dangerous place. There are cowboys and Indians, singing and dancing, murder and intrigue. And plenty of fun for everyone who shares whatever gold we find along the way.

By Theo Spring of The Croydon Advertiser

Absolutely everything came together in this first class production for which the directors, Sharon Laws and Rick Thompsett deserve high praise.

“A talented cast” is a phrase often used in my reviews but for this production for “talented” read “brilliant” – for that is what they were. Their scouse accents were realistic and reliable throughout and the acting of the highest standard. Being amdram, getting the twins of the tale to actually resemble each other is nigh on impossible but Toby James as Mickey and Oliver Robinson as Eddie, although bodily chalk and cheese, made us believe. Growing up on stage, from a 7 (almost 8) year old to an adult is a tall order but both as rough and tumble boys, through puberty to grown ups with responsibilities the roles were realistically portrayed.

As the careworn Mrs Johnston, Jo Cullen also grew her character from a romantic young girl to the mother of a growing brood. With a feckless husband who scarpered, the tough decision to give up one of the twins she carried was heartbreakingly delivered.

Siobhan Ames as the wealthy, childless Mrs Lyons who inveigled Mrs Johnston to give her one of the twins, brought a growing desperation to the role, but even those who knew how the tragic ending would unfurl were still shocked by the final scene, so charged was it with emotion.

Linda – young friend and later love interest for both the twins – was brought to life in a happy, lively manner by Katherine Sparshatt who gave Linda fun as a little girl, romantic teenage wiles and intelligence beyond her years as an adult.

Mike Strong as the Narrator wove himself in and out of the plot with agility – setting the scenes both literally with furniture and props and metaphorically with the script, and Geoff Thorn transformed himself into three different character cameos with great skill.

Janet Bennett’s street scene set was both imaginative and practical with its low cost housing, closely crammed doors and perspective layout. Full marks to Alan Croft and his construction crew for actually creating it. To Lorraine Bygraves go congratulations for all her wardrobe changes, all done in keeping with the 1950s-1980s time frame.

Each of the short film sequences which opened the acts helped set the scene, and incidental music was apt, with the exception of the closing choice which had the right sentiments but, although released in 1974, seemed a little modern. A reprise of the orchestral version of “Tell Me It’s Not True” might have suited better. The programme, although containing a few errors, was informative and excellently produced, but to leave this review on these minor niggles would be unjust to the production which must go down as one of Chipstead’s finest and a great credit to everyone involved.

What’s On This Season


Warning: A non-numeric value encountered in /homepages/3/d186930706/htdocs/new/wp-content/plugins/slider-image/slider.php on line 2185

Warning: A non-numeric value encountered in /homepages/3/d186930706/htdocs/new/wp-content/plugins/slider-image/slider.php on line 2185